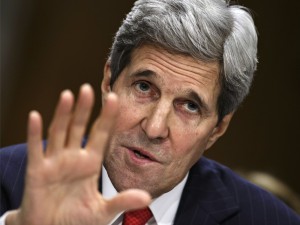 The US just concluded a deal with an aggressive, militant, government that encourages chants of “Death to America” at its rallies, and has played a major role in the systematic killing of Americans all over the world. “Side deals” that are secret – even from us – are part of the “deal”. This isn’t even appeasement. It is catastrophic foolishness.

The Iranians are now working hard to build up a nuclear capability, and ICBMs. They don’t need ICBMs for local defense. ICBMs are only useful to hit distant targets, like the US and Europe. “Deals” will not protect us. Vigilance is the only way to protect our nation.

The Deal just struck with Iran is supposed to ensure that Iran does not make nuclear weapons, but the deal appears to be, at best, toothless. At worst, it is a giveaway that will grease the skids for the Iranians to build bombs and acquire ICBM capability.

The proponents of The Deal say that it is the best alternative, and if the Iranians “cheat”, we can still use the military option. I say that the deal is a step backwards, and we are better off without it, even with the sanctions gone. The Deal provides no meaningful inspection regime, and provides money and political legitimacy to the Iranians. It even requires the US to protect their nuclear program, which appears to require the US to ally with Iran if Israel attacks them.

History is replete with foolishness and wishful thinking dominating momentous decisions before cataclysmic events. The “Long twilight struggle” is a reality that cannot be avoided. No “parchment barrier” will protect us from our enemies. There is no choice but to continue our vigilance, because when we relax our guard, our enemies see only weakness and opportunity. This deal must be rejected. Our painful and expensive vigilance must be maintained. If we embrace this deal, and it enables the Iranians to do what they repeatedly have said they want to, the price will be very, very steep.