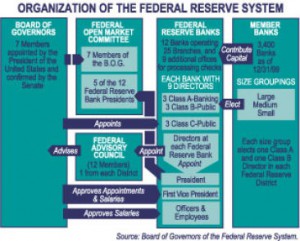 The function and purpose of the Federal Reserve is not widely understood, but most people know that it regulates interest rates.   They also know that “The Fed” has been driving interest rates down to historic lows in the last few years.

The purpose of its action is to “stimulate” the economy.  It is easy to find news articles about how “The Fed” is planning on maintaining this “easy money” policy until the economy “recovers”. (also here)  The theory is that if businesses can get money cheaply, they will investi it, and grow their businesses.

The result of this policy is that interest rates are at historic lows.  The rate on a 10-year T-bill is currently 1.62%, less than half the historic average.  This is great for those who want to borrow money, but not good at all for those who have savings and need the interest income.

Retirees have been severely squeezed by this, because conventional wisdom guides retirees to keep most of their money in bonds.  Planning for retirement was probably done with yields on those bond funds in in the 4-5% range. When bonds are trading at sub-2% interest rates, those plans are ruined.

Another effect of the “easy money” policy is that as a large corporation, you are able to borrow money at next to no cost.  Smaller companies cannot do this, because the overhead and risk involved in loaning to them is larger, relative to the size of the loan.  The big beneficiaries of this policy are companies like Amazon.com and Google.  (Read here)

In an ironic twist, easy money also burdens our young people.  Encouraging borrowing encourages debt.  Case in point, state and federal governments borrowing like mad because it’s so cheap.  The losers?  Our young people, who will be stuck with the bill.